Lego Serious Play at a distance 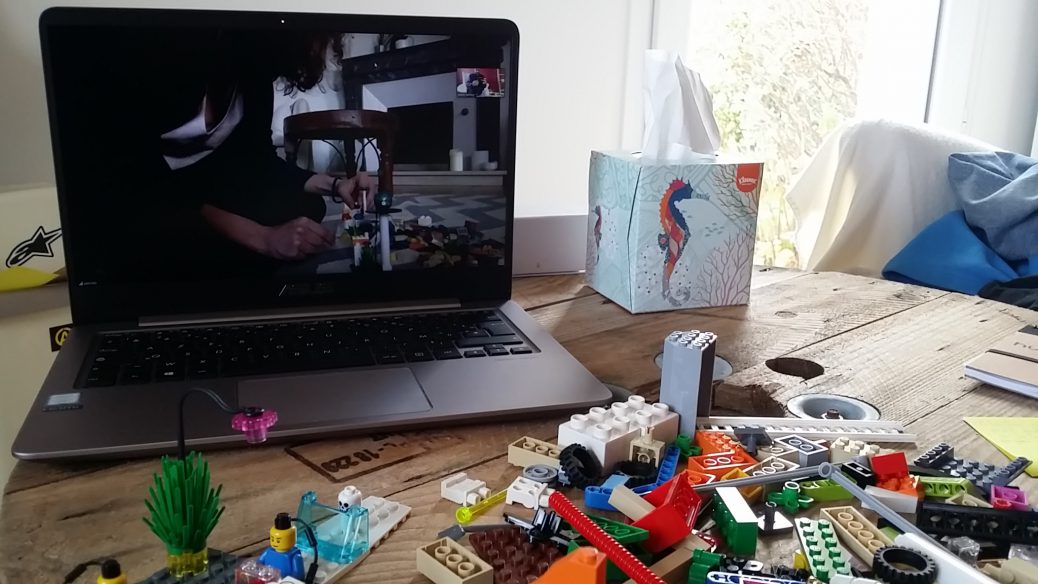 I was certified as a Lego serious play facilitator a couple of years ago and have been running workshops in industry for a couple of years now. Since I discovered this method, I have found that it is particularly suited for exploring abstract concepts. I use it extensively to help teams build a shared vision, explore their mission, uncover their values, and generally talk to each other with authenticity. I have found that the method is particularly valuable in transforming ideas or concepts into a practical understanding of the topic for all participants.

Over the last few years, I have been very interested in the topic of distance collaboration and learning. All too often, distance collaboration has been an unsatisfying experience for me ending up in either a face to face meeting or something that leaves me with a feeling that we could have done more together or weren’t quite as effective as I had hoped.

As part of my personal development and the development of my business, I work with other professionals on a regular basis on topics of mutual development. We share insights and experience and give each other feedback.

This is at a distance and works well but sometimes, there are questions pertaining to one’s life purpose or mission, which we find difficult to answer. I have been thinking for a while that the Lego Serious Play method could help answer those questions by accessing the knowledge that we cannot connect to when trying to think about these topics.

In the past, I had proposed to my development partner to experiment with the Lego serious play method and had sent her a starter kit by post a while ago. We had not done much about it until last week when she came with the topic that seemed ideal for experimentation: she had been asked as part of a training course to define her identity as a coach and professional. She needed clarity and as she is developing her business, this is a question she could not answer directly. We decided that we would experiment distance coaching using Lego Serious Play to see if I could help her.

Since we are both separated by more than 1000 km, we decided to work using videoconferencing on our laptops. We both had Lego starter kits and as a facilitation method I chose to do the following: I would ask her a question, she would build a model answering that question, and I would also build a model giving her feedback, based upon my perception of where I could see from my viewpoint about her situation. For example, I asked what added-value she brought to her clients, she answered the question by building a model, I build a model showing what added-value I think she gives her clients. My model was based upon previous discussions and my gut feeling.

One of the main challenges I found, was the scaffolding of the question. We were doing this in real-time, like a conversation. Unlike a workshop in which I carefully plan my questions ahead, I chose to offer questions based upon my intuition of what was needed. I will admit that this took me out of my comfort zone as I had no idea whether what I was offering as a question would be helpful or not. I decided to trust both myself and the Lego Serious Play method.

Once we had both built our models, we shared in the traditional way, by pointing to the different elements of the model and commenting them. There was an added challenge where the other person needed to see properly the model via the web cam and this required sometimes moving the computer or the model. My view of her model

I gave her time to take notes after each sharing so that she could capture both what she had said and the contents of my model. I took a picture of my model and sent it to her each time by email.

We did not do any skills building exercises beforehand as she already had a good grasp of using Lego bricks and building metaphors.

I feel that this was an important part of the exercise. In a coaching process you are seeking to ask powerful coaching questions. For the Lego serious play aspects, I did not want to ask her directly to build a model in which she would define the characteristics of her identity as a coach and professional. I felt that given the situation, the step would be too large and therefore she would be out of flow.

I asked four questions in total:

I answered each of these questions from my perspective as a kind of feedback, using an application technique 1 of external identity.

My development partner found the exercise very useful and it helped her to write up her description of herself:

Before trying, I had two main questions: would skills building be necessary and would it be possible to share at a distance using just a webcam.

Skills building is still an open question for me and I would need to experiment further. What would happen with somebody who hasn’t used metaphors in that way before? Would a client be prepared to do a skills building session before starting on the “real” work?

From a technology point of view, it works fine although it takes a fair amount of collaboration between both parties to properly see the model. The person sharing doesn’t always see what she is showing, so the person receiving needs to say what she can see and ask questions if the picture and the commentary don’t match. The laptop has to be held steadily otherwise it can be quite unpleasant to watch. Finally, the angle of view can influence what the other person sees or not, so there again, it requires good two way communication and questioning. I found that this aspect of the limitations of the technology was actually a valuable asset because it helped to explore the model and metaphors in detail and further collaboration.

From my perspective, I initially felt there was a certain element of risk involved. Giving a feedback based upon my perception, my feelings, and whatever information I had collected from previous discussions meant that I had to be in the “I don’t know the answer zone”. I had to be completely open, non-judgmental about what I was building and about what I was offering. There again, I think it is helpful because it put us both on an even playing field, in the “I don’t know zone”. We were both vulnerable and seeking answers.

I would now feel more comfortable offering this to a client, although I would probably need a few sessions beforehand with that person to build trust, to understand a little about them, and to be able to contribute fully by providing meaningful feedback.