We’ve played LEGO using LEGO Serious Play approach mixed with improvisation, coaching and creative thinking. The play helped to uncover LEGO tools opportunities for showing and sharing personal thoughts and vision in a group.  The scenario was build up of exercises that helped people build relations, break the ice, make introversive interpretations and share vision in a group.

We used LEGO as a tool for visualization and prototyping of interrelations between Me – My Clients – My Business.  One of the exercises named Business Triangle showed, how people change and update their vision while building it with LEGO Bricks.

During the workshop we realized, that LEGO is a powerful tool for deep reflection and building effective dialogue in pairs or teams. Mixed with coaching exercises and facilitation practices, LEGO gave people an opportunity not to make reflection of their previous and present experience in business, but to build (both mentally and physically) a bridge to their future vision.

For our team this was an eye-opening experiment that revealed strong correlations between personal identity with its strengths and weaknesses and business vision.  LEGO helped people uncover their pains and fears, make positive propositions, how to solve wicked problems, and what’s more important, how to use other participants experience and visions to make their own ideas better! 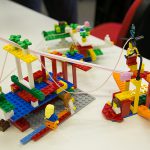 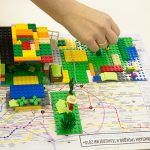 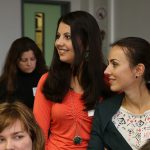