The Development Fund‘s FUTURES FORUM 3 “Globally Competitive, Locally Attractive Estonia in 2018” took place on 6 May 2010 at 10-17 at the Chamber Hall of Theater “Estonia” This year’s Futures Forum was the kick-off for the wider discussion of Estonia’s mid-term future. The purpose of the debate is to reach a shared vision about the possible sources of economic growth for Estonia in rapidly-changing world.

The day was opened by the President of the Republic of Estonia. Thereafter a group of individuals from a think tank described 4 potential regional future scenarios. To get inspiration for creative vision-building the participants listened to a number of lectures. Eamonn Kelly (CEO emeritus of the Global Business Network and former chairman of Scottish Enterprise), Mikko Kosonen (President of the Finnish Innovation Fund Sitra and former Strategy Director of Nokia) and scenarios guru Peter Schwartz During the second half of the day the participants received LEGO SERIOUS PLAY exploration bags to come up with their vision for country mid-term future for 2018. They were sitting in tables of 10, each lead by a qualified instructor, who had been previously trained by me about the Lego Serious Play methodology.

They had 3 minutes to build their individual models: “How do I see Estonia in 2018”. Thereafter each one of the participants described their models to the other members of their group. The groups spent an hour to come up with shared vision and identifying primary success factors. Finally a number of groups presented their understanding to the other participants via electronic means – each leader of the table summarised the findings and communicated the discussion results to the central repository via instant messaging solution. The resulting knowledge was reflected upon and filtered by vision building task force. 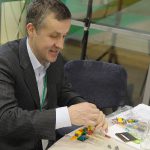 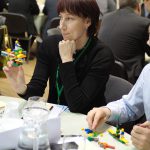 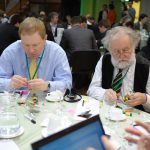