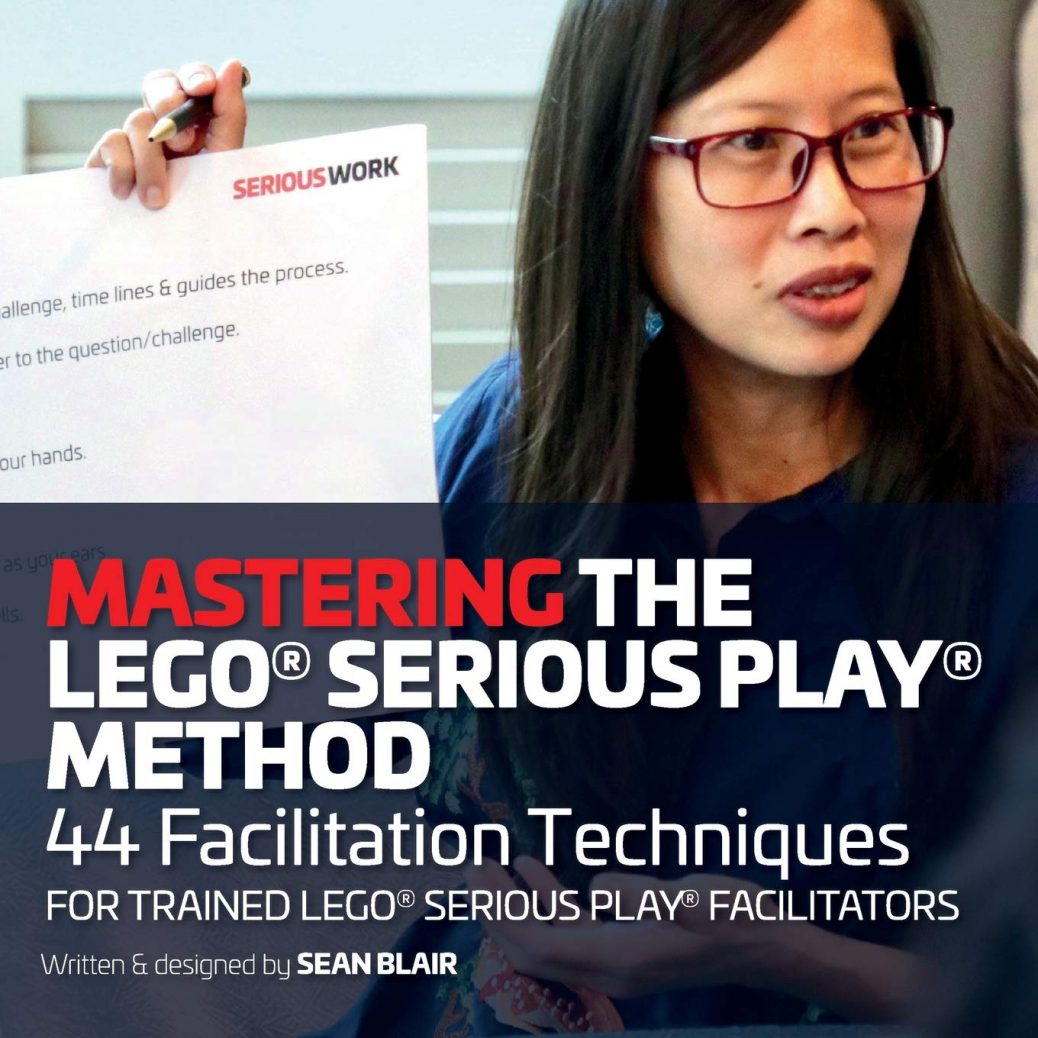 Sean Blair is one of the most experienced facilitators who also runs his successful facilitator training business Serious Work. We co authored 4 years ago the book Serious Work. How to Facilitate Meetings and Workshops with LEGO Serious Play method.

I have read this book and as Sean kindly asked me to write the foreword then I have also published it here for our community members.

About five years ago, via SeriousPlayPro.com, Sean reached out asking for help on a workshop challenge he faced. He was already a very experienced and acclaimed facilitator who had recently added LEGO Serious Play to his toolset.

Sean said in our first Skype conversation: “I have this important workshop coming up with 300 people where I want to use LEGO Serious Play, but I am not sure it would work out, as I only have an hour…”

Sean had completed a full 4-day training on LEGO Serious Play and while he had witnessed a master trainer talking about facilitation, he did not get an opportunity to practice.

We discussed his upcoming workshop, I made some suggestions and I told him to go for it, I knew it would be great! Sean did, and indeed – the event delivered great outcomes.

Since then we became friends and exchanged our professional experience on various LEGO Serious Play projects. About a year later this ping-pong of ideas resulted in a book titled “SERIOUSWORK, How to Facilitate Meetings & Workshops Using the LEGO Serious Play Method.”

I am glad to see that while LEGO Serious Play methodology is already two decades old – to date, the SERIOUSWORK book has remained the only hands-on publication to help the newcomer get started with the LEGO Serious Play method. SERIOUSWORK would not have been possible without Sean’s great ideas, relentless enthusiasm to write handful of pages every day and his good eye for design.

In addition to his daily work as a facilitator and trainer, Sean has constantly been an avid community builder. He was the first person to initiate the LEGO Serious Play MeetUps where he started sharing his experience. I admire his ability to produce case studies of previous workshops in blogs and social media.

It is lovely to see that no more than four years since our first book, he has topped up his energy to summarize a batch of clever lessons to kindly share his wisdom in another volume that you are holding in your hands.

What is Interesting in Mastering LEGO Serious Play?

The first book, SERIOUSWORK, focused on simple LEGO Serious Play workshops. However, the life of a facilitator is never simple. Every facilitation situation is new. Facilitators need to be mindful about updating their skills, about reflecting their personality and about adapting their presence. Therefore, the journey towards facilitation mastery never ends.

Sean has now untangled some of those complexities in the book that you are holding in your hands. There are three things that fascinate me about “Mastering the LEGO Serious Play Method” book.

First, the attention to the consistency of workshop design. In an age where bad meetings are commonplace, it is truly refreshing that Sean emphasizes the need to build strong internal logic and linkages between workshop objectives, build questions, reflection questions and workshop outputs. Tying all four elements closely together is a way of ensuring that meetings will be productive.

Second, I like the section in this book where he explains LEGO Serious Play Build Level 2: Shared Model building. Working on shared model creation is a messy process. Or as facilitation guru Sam Kaner has called it: facilitating through “the groan zone”. Part of shared model building is where participants attempt to understand each other to find common ground. Part of it is where they generate new ideas.

Given the conflicting goals in this part of the workshop, shared model building is frequently frustrating for the participants and challenging for the facilitator. Sean has suggested several practical ideas on how to make the process more manageable.

Sean has listed several useful tips on how to take it easy and stay “clean” as a facilitator by acting more like a conductor of the orchestra, who is not attempting to play all the instruments.

I love the passion for facilitation that Sean shows throughout this book. I am certain that by reviewing his tips from time to time, every seasoned LEGO Serious Play professional can remind themselves on how to truly progress towards mastery of their skill.

You may buy the book via Amazon