IBM Case Study: Creating a Lexicon of Meaning for #playmobilpro 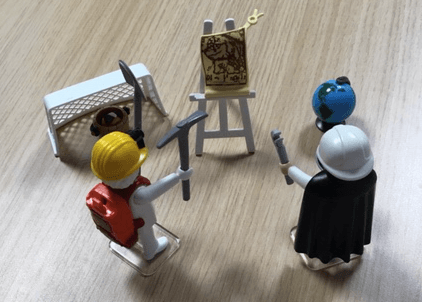 I facilitated my first session with #PLAYMOBILpro last week at IBM. I use the word ‘session’ intentionally, rather than workshop. And I think in hindsight I somewhat stretch the boundaries of how you might define the word ‘facilitate’. Perhaps ‘allowed to happen with some loose signposts along the way’ might be closer to the mark…

The session kicked off day three of the workshop, and I had to come up with a 20 minute activity which required the participants to reflect on and share their key learnings from the first two days of the workshop. The workshop up to that point had largely been a mix of plenary, role play, problem-solving and group discussion. I thought doing something like PLAYMOBIL®pro. would expose them to something completely different, requiring a very different way of thinking, much more tactile or ‘kinaesthetic’, in order to create shared meaning.

I asked each participant to individually share with their table colleagues (there were four tables, 19 people in total) what had resonated with them over the last two days. They then needed to agree as a table group, 2 – 3 key learnings in total, which they would build using PLAYMOBIL®. Once they had built their ‘model’ they would create a story which they could then share with the rest of the table groups.

In terms of timing, I gave each table 5 minutes to individually share their key learnings, 3 minutes to agree their 2 – 3 key learnings for their table, and 7 minutes to build their PLAYMOBIL® ‘model’ and come up with the story for it. Each group then had 1 minute or so to tell the story of their model to the other three tables.

I had no idea whether 7 minutes was too long or short to build their PLAYMOBIL® model; I think people adapt to the time they are given anyway, so whether you give them 15 minutes or nine minutes, they would have built something and come up with some kind of makeshift story for it.

Of the four tables, three used the PLAYMOBIL® characters, props and costumes to represent different concepts, while one group used it in a very literal sense ie. they built a model of an interview they did as part of a particular activity.

I gave no instruction or guidance how they could use the contents of each box, apart from saying that they should try to be as creative as they can be in how they interpreted the figures, costumes and props from each box, and that they needed to share everything.

And in fact, there was only one group of the four that used the PLAYMOBIL® in a very literal sense to create an interview scene. Even then, however, there was a mix of the literal (the interview scene with people sitting in office chairs), and the metaphorical or figurative. Some figures brandished swords and medieval axes representing those characters that they perceived as being somewhat intimidating.

There was a great level of conversation amongst each group and lots of smiling! There was lots of trying out and experimenting, iterating and adding new layers of meaning, telling and retelling the stories of the models. The stories being told never really felt as if they had an ending. They simply came to a pause at the moment in time, ready for more meaning to be added or taken away; just as easily as adding a cape or a jester’s hat to a figure…

In terms of improvements (although I feel hesitant in using the word ‘improvement’), the biggest one for me so far would be the addition of baseplates to put the individual elements of a model on, so that it is easier to move around in tact, rather than piece by piece. A variety of baseplate sizes would be good as well, allowing for smaller individual models and larger shared ones.

The need for a PLAYMOBIL®pro. lexicon to help participants speak the same language ie. ‘model’ to refer to all the individual elements put together when a participant(s) builds their response to the challenge being set by the facilitator. This is, however, something I think that will organically evolve over time.

What has been interesting for me so far, as well, has been to try to let PLAYMOBIL®pro. carve out its own space, rather than try to impose my own thinking on it, particularly in terms of applying concepts and terminology from LEGO® SERIOUS PLAY® (LSP) or even Design Thinking. However, in my mind there are definitely some aspects which could be borrowed and adapted for use in a formal workshop. If we take a look at the idea of the Skills Build for example from LSP.

The Skills Build comes at the beginning of the workshop and helps to level set all participants through a series of short activities, so that they are fully prepared when the main workshop gets underway, and get the most out of it. My sense is that a PLAYMOBIL®pro. workshop would also benefit from such an approach. This would have the dual function of helping participants who have experience of PLAYMOBIL® going beyond their known experience from childhood perhaps, and those who have no experience helping them, or giving them the permission, to understand how far they can push their own thinking and creativity. This would help participants understand how the figures, props and costumes can be used, whether literally or as metaphors to represent ideas and concepts. Furthermore, the Skills Build also helps to create a safe environment in which the rules, approach or methodology are understood and established. This is the time when scepticism at a new or seemingly ‘silly’ tool such as LEGO® or PLAYMOBIL® can be addressed and hopefully overcome through some initial warm-up activities. This is a time when people can practice speaking aloud and sharing their thoughts and opinions with others, without necessarily realising it. This is a time when everyone gets a chance to build, create and share. It is a time when democracy of speech and equality of views and opinions is established, regardless of differences in hierarchy or experience.

There is a potential richness to PLAYMOBIL®pro. also that needs to be unlocked and discovered, where minds need to be expanded to understand that a figure with a crown can represent – leader, king/queen, CEO, headstrong, confidence, arrogance…, while an upside down crown may denote – despot, oligarch, dictator, evil, failed potential, vulnerability, weak leadership…, or even extended to encompass the idea of quirkiness or craziness in a leader (seen as a positive rather than a negative). A figure can be more than just a figure, but can also become a metaphor. The Skills Build also helps to do this.

My sense is that these types of additions will organically evolve over time based on common practice amongst facilitators. Will PLAYMOBIL®pro. evolve to such a degree that there is a set methodology as with LEGO® SERIOUS PLAY®, I’m not sure. Does it matter? On one level, no. But on another, yes. It matters, because these types of ‘mechanics’ might help to make a PLAYMOBIL®pro. workshop (or ‘intervention’, when other approaches haven’t worked) more effective and productive for the participants, more fun and creative, more engaging. And sometimes, even our facilitation toolboxes need refreshing and re-energising, and this might be one way to do that.

It was a good first experience with little risk attached. It gave me a sense of the way PLAYMOBIL®pro. could be used, as well as the possibilities I’m yet to discover.