Using LEGO to help create a vision or mission statement 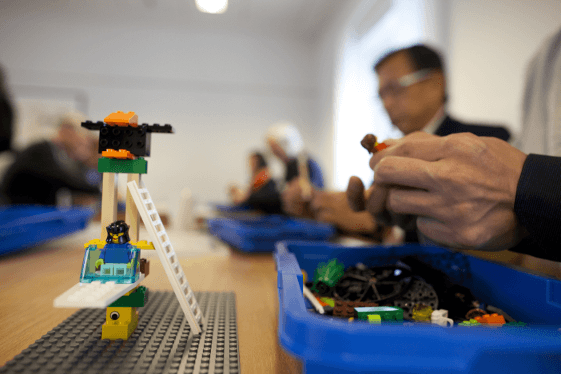 LEGO Serious Play is a facilitated fun process using LEGO bricks to help uncover new insights while giving everyone in the group a voice and confidence to participate and converge to a shared commitment. My example is one of a group of leaders in a university’s brand and marketing department. LEGO Serious Play was used to help a group of 13 leaders achieve a remarkable result. While planning the session which I was asked to facilitate, I focused on one of the main outcomes which was to revisit the current lengthy mission and values statement and shorten them. After two warm up activities, I asked the group to build two LEGO models: 1. Representing their ideal working environment and 2. Representing what they could do to demonstrate living the current mission. This got them thinking abut the future and their current belief in the existing direction.

Next, each person was asked to build a model that represented an aspect of trust. Each person was then asked to place a red brick on the most important element of their individual model. Then in pairs, they formed a shared model and were asked to eliminate any excess bricks while still holding the same meaning of the newly combined model. They did several rounds of this and I was quite persistent telling them they may still have too many bricks and so long as they kept the essence of the meaning they were to remove any excess bricks they could. The pairs were able to reduce the models significantly. I then got them into three groups and showed the mission statement on a big screen and asked them to apply the same thinking. What words could we remove to reduce the length of the statement but still keep the essence of the meaning? After three rounds of discussions, we had it! A new seven words mission statement (the original was 29 words long) and everyone was on board. In a matter of about thirty minutes, we had achieved something they had taken hours to do previously and now had a succinct message to hang all of their activities on.

At the end of the two day session, the group referred constantly back to the amazing experience of the ‘chunking’ down process that LEGO Serious Play allowed them to experience.

If you want to learn more about LEGO Serious Play – check out this link or this LinkedIn group:

Derek Good has been a General Manager for a number of years and since 2002 has been involved in corporate training and consulting. He has won the North Shore Business Awards for Customer Service Excellence and the TUANZ Award for innovation for general training. He has been a LEGO Serious Play facilitator since 2009. These days Derek’s focus is on researching the changes in training trends and developing his online micro video training organisation LearningPlanet which is currently accessed by thousands of users across a number of countries.