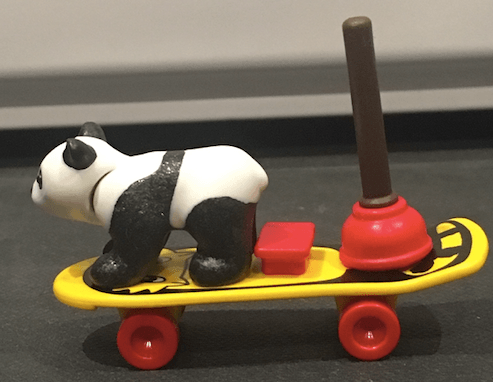 Editor’s Note. When Hans Beck created Playmobil toy business in early 1970ies their focus was different from that of LEGO. LEGO was focused on building, Playmobil was about plastic fairy-tale figurines. Pirates, knights, historic figures. Over the years, LEGO has introduced minifigures and Playmobil has introduced bricks. Thereby, two companies have grown more alike and have started to compete.

Recently Playmobil released Playmobil Pro, which bears much resemblance to LEGO Serious Play. Guy Stephens tested the kit and explains the differences below. You may also read about his first Playmobil Pro practice session at IBM.

Comment below to ask Guy questions about his experience. -Marko Rillo

I finally received my PLAYMOBIL pro kit today; many thanks #playmobilpro for letting me take part in your testing.

As I opened the box, I was that child again, transported back in time to my childhood days; the excitement of opening the box and taking the kit out.

I love the fact that the PLAYMOBIL pro kit felt like a kit. It wasn’t just some PLAYMOBIL pieces in a box. The carry case was just as important as the pieces themselves. The creators had thought about it.

Seeing and touching familiar pieces; like meeting an old friend. Seeing familiar pieces updated, and new pieces imagined. There was a real sense of discovery. Familiar, but at the same time unexpected. It was great fun going through each box; seeing what was included and chosen, was just as much fun as trying to understand why those pieces had been chosen and not others. There was a randomness about it, that I found a little bit unsettling. Unsettling in the sense that the reliance on me to decide how to use the kit was my decision and mine alone.

Where LEGO SERIOUS PLAY (LSP) is structured, in the sense that there is an underlying methodology and approach to it, there are seven applications and a set of four distinct stages to how you approach a challenge, PLAYMOBIL pro is still very much an idea come to life. An idea still forming. An idea that at this stage has literally no boundaries. And so the onus is far more on me to bring the myriad of pieces to life. My limitation is my imagination and my creativity. And that excites me. In some ways, I’m also wondering: can I live up to it? Do I have the imagination and creativity to bring the pieces to life. A PLAYMOBIL dog is a dog, but what more can it be? Where a blue LEGO brick can literally or metaphorically be anything I want it to be from a blue brick, to democracy, to a chicken, can a PLAYMOBIL dog be anything other than a dog?

So the kit comes with four ‘trays’ labelled: Stationery, Props, Costumes and Characters. Each one is like a treasure chest. You can spend time just going through each compartment, getting to know the pieces. Okay, I did, you might not! I like the fact that there was a Stationery box with pens, post-it notes (you got to have post-it notes, right!?), coloured masking tape. I’d probably replace the post-it notes, with my favoured ones from Myndflo; if you don’t know them, check them out. They use electrostatic to stick.

There were also two packs of ‘cards’. Think of them as ‘prompt’ or ‘inspiration’ cards. One with happy and unhappy faces on it, with each one representing a different state of being ie. unhappy face – Confused, disoriented, unclear and on the flipside a happy face – Clear, transparent, expected. The other a pack of cards with random words and concepts on them, representing customer touchpoints. This could be anything from smartphone to self-service, ambience-smell to logo, Chat/IM to myths.

My favourite pieces so far: skateboard, bicycles and microscope.

My favourite random pieces have to be the toilet plunger and the bearskin hat.

The animals as a whole are great, with standout ones being the badger, hamster, and raccoon. Scale is a bit up and down, but this is all about a suspension of disbelief right. It would be great to have some animals like a tiger, lion, elephant (elephant in the room). There’s even a panda and an octopus.

The Costume box must also house one of the finest sets of PLAYMOBIL headwear and musical instruments. But there is a rather disconcerting eye.

So, what next? Well the idea is to now run some workshops. I’m looking forward to seeing where we can take this.

I guess it’s down to my creativity and imagination!