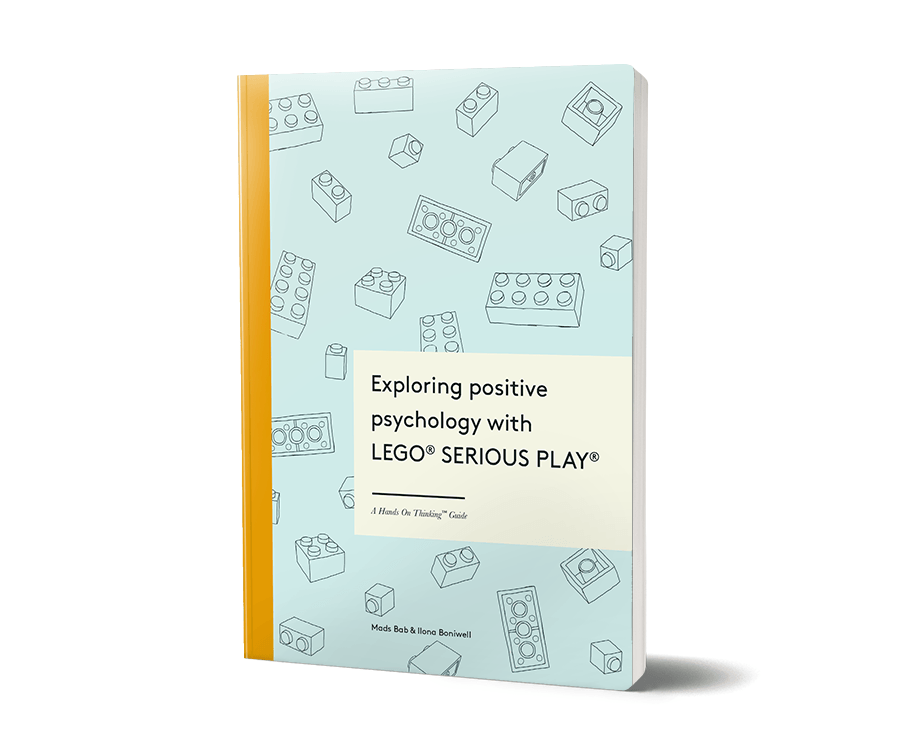 Learn how to apply LEGO SERIOUS PLAY with Positive Psychology. Ebook and training available at www.buildandshare.net

Positive psychology is a science of positive aspects of human life in organisations, schools and life in general. It deals with topics such as well-being, flourishing, flow, sense making and mindsets. It can be summarised in the words of its founder, Martin Seligman, as the “scientific study of optimal human functioning that aims to discover and promote the factors that allow individuals and communities to thrive”

1.  Learning from the past

LEGO® SERIOUS PLAY® (LSP) is a strong tool to do a range of different retrospective explorations. It can be used to share and align “lessons learned” by having the group reflect on how things went well and what influenced a certain outcome. From here the group can make a more informed decision on what changes they want to make in the next iteration.

LSP can be used to explore challenges from our past but also the nature of our success and progress.

The negativity bias refers to the notion things of a more negative nature (e.g. unpleasant thoughts, emotions, or social interactions; harmful/traumatic events) have a greater effect on one’s psychological state and processes than do neutral or positive things. (Rozin and Royzman, 2001) In other words, something very positive will generally have less of an impact on a person’s or groups behaviour and cognition than something negative. LSP is a neutral tool not seeking a “negative” or “positive” analysis.

It can however help balance out the negative side effects of our negativity bias by making the positive explorations more visual, tangible and deeper in terms of meaning.

The building of models and creation of narratives and metaphors helps participants separate their problems and negative experiences from themselves. This process of externalization allows individuals and groups to explore their relationships with problems, thus the narrative motto: “The person is not the problem, the problem is the problem. The same goes with strengths or positive attributes which are also externalized, allowing people to engage in the construction and performance of preferred identities.

We could tell the same story from several different perspectives and the result of that would be a change in attitude and feelings which could have an enormous impact in our life. The different variety of ways of telling a story influences how life is experienced (Freedman and Combs, 2009).

2. Learning from the present

Life and learning unfolds in the present but we live in a world that contributes in a major way to mental fragmentation, disintegration, distraction and less coherence. In many cases the effects of these mental challenges makes it difficult to align ourselves or the group in the present.

LSP helps cultivate a non-judgmental awareness of the present that bestows a host of benefits to the individual and group. First and foremost a benefit is an increased awareness of behavior that hinders or helps the group learn collaboratively. In other words it induces a sense of collective mindfulness.

The science of mindfulness implies that it is important to live in the moment, but the problem is “how”, says Ellen Langer, a psychologist at Harvard and creator of the psychology of possibility. “When people are not in the moment, they’re not there to know that they’re not there.” Overriding the distraction reflex and awakening to the present takes intentionality and practice. (Langer, 2014)

LSP gives the facilitator tools to help a team or a group, in a fun way, to construct and imagine their realities, access and voice subconscious knowledge and insight that might otherwise be harder to bring forth.

3. Moving towards the future

Understanding the future and building the determination to move towards a desired future is a core application area of LSP. The abstract nature of the future, of goals, dreams, visions and possible scenarios makes LSP a strong tool to help make the future more comprehensible and manageable.

This ability to represent possible futures fundamentally shapes human cognitive, affective, and motivational systems. Prospection is a ubiquitous feature of the human mind. What you intend to do is based on what happened in the past; what you actually do is not. Becoming aware of these mental challenges when moving toward the future is a key.

LSP serves as a catalyst of the prospection process allowing a multi-dimensional exploration of the future. The use of LSP helps the group to free itself from constricting mindsets and the limits they place on our thinking.

Too many positive psychology interventions rely mainly on cognitive processes leaving a group with very few ways to really explore well-being. This often results in challenging group dynamics, where few people define the majority of the sessions and where the take-aways of a session are abstract and difficult to remember.

LEGO® SERIOUS PLAY® (LSP) is a technique which improves group dynamics. By utilizing visual, auditory and kinesthetic skills, the method requires participants to learn and listen, and it provides all participants with a voice.

LSP serves as a shared language regardless of culture or position. It is appropriate for children, teens and adults and may be used in a variety of settings ranging from corporate workshops, classrooms to group based counselling sessions.

Participants in all domains come away with improved skills to learn collaboratively, to engage their imaginations and underlying beliefs more effectively, and to approach their area of interest with increased commitment and insight.

Learning to use LEGO® SERIOUS® PLAY® for Positive Psychology

Mads Bab, who lives and works in the home country of LEGO, Denmark, has worked with LEGO® Serious Play® for more than 10 years and pioneered Build & Share – the link between this playful method and positive psychology. Mads who holds a Msc in applied Positive Psychology from University of Easy London, is an experienced facilitator of group processes and author of books on flourishing at work. Mads is also part time associate professor on the Danish Master of Postive Psychology program.
From his Danish based consultancy Gnist (Danish word for Spark), Mads has worked with LEGO® Serious Play® for positive psychology around the world and presented the ideas at conferences in USA, China and around Europe.