Is there a future for Lego scribing? 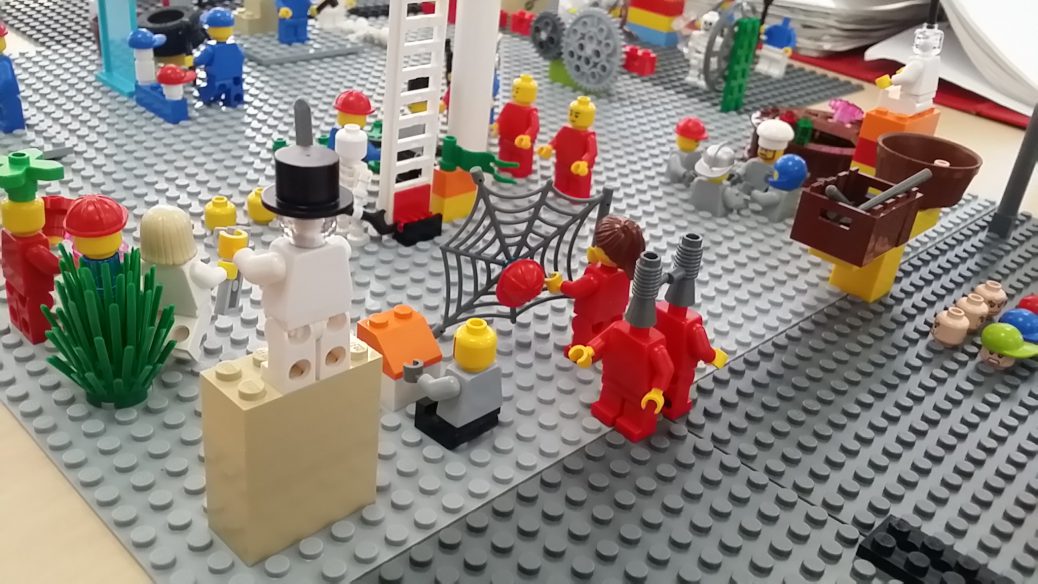 Yesterday I experimented something new. I was lined-up to co-facilitate an organizational  workshop using paper and Post-it when the facilitators organizing it came up to me the day before saying that they wanted to use Lego bricks in the workshop. My brain immediately said “Uh-oh!” as usually when people ask me to use Lego bricks for a workshop; they don’t mean using the Lego Serious Play method.

I needed some clarification: “what do you want to do with Lego bricks?” Basically, we didn’t have time to train the participants in skills building so LSP was out of the question. They wanted a different way for each of the 3 groups to share the result of their work. One group was supposed to produce a puzzle, one had a graphics facilitator scribing and for my group, they wanted me to do simultaneous translation of the conversation into Lego bricks, something I’d like to call Lego scribing. The purpose was to capture the essence of the discussions.

I started thinking about it and whether this made any sense but before I could get anywhere, they threw the gauntlet at me saying that I am always taking them out of their zone of comfort and that now was my turn. Deal!

My task during the workshop was to listen to what was being said and simultaneously build a Lego model. I built metaphors to help capture the story of the conversation. As with many passionate and animated conversations, there was a fair deal of debating so I would capture only what the group agreed to. This often meant building something and then adapting or deconstructing it as the discussion evolved.

Once that sequence of the workshop was finished, we had on the table a base plate with a few smaller attachments telling a story. It so happened that the facilitator had structured the conversation around five main concepts (Principles / Management / Processes / Resources / Customers) so that made it easier for me to tell a story. The team was very impressed with the end result and found that it brought their conversation to life. They were surprised that so much information could be captured in a few bricks.

The question that bugged me was: “does this make any sense at all?” All three groups then had to share the results of their work. As expected, in my group, I was the only person capable of sharing the entire model. Some people could share parts, but they hadn’t built it so didn’t get all of the detail.

When all groups gave feedback, I noticed a few things:

As far as I am concerned, this isn’t really a scientific study about the benefits of Lego scribing. It sure drew attention, people listened, and my group was more pleased with the deliverable than the other groups. In terms of information retention, all methods were pretty low, but I guess the Lego scribing ranged slightly higher. It is obvious that appropriation is much higher when group members are participants in a Lego Serious Play process.

Is there a future for Lego scribing?

Could this be a fun way of reporting back when you don’t have time to run the entire process?

I think so. Telling a story is always more powerful than running through a sheet of paper reading statements. I would equal Lego scribing to visual facilitation with a novelty twist that commands attention.

In doing this exercise, I found that to be effective, I would have needed to set-up my Lego trays and boxes differently. I had to make do with whatever bricks were on hand as sifting through the box was noisy and covered the discussion (I don’t know if I should see a therapist for this, but I actually know by heart what bricks there are was looking for a specific brick…). Everything needed to be laid out flat as in order to keep up with the discussion, I didn’t want to be looking for bricks.

I made simple metaphors and enriched or simplified them as the discussion evolved. I found Lego to be particularly easy as a medium to make evolve as points of view change (I’ll willingly admit that I’m a budding visual facilitator and probably not as skilled in getting my symbols to translate as well the discussion I hear).

This time, I used many more minifigures, hats and accessories than usual. I don’t know whether it was the topic or the speed at which I could rapidly capture the message. Bricks came to give context to the minifigure.

It was easy to build a story on a large baseplate and add bits on smaller baseplates as and when. Once I knew how the metaphor built on the smaller plate fitted in with the big picture, it was quick and easy to attach the plate to the main one or to add the model to the main plate.

At the end of my scribing, I ran through the story and “cleaned” the board up to make it visually more pleasing.

I’d be curious to know if anybody else has played with this concept and was learning you may have extracted from it. Would you think Lego scribing has a future? Have you found it effective as a scribing or note taking activity? What level of attention and information retention have you experienced?