Co-creating the future with Lego bricks 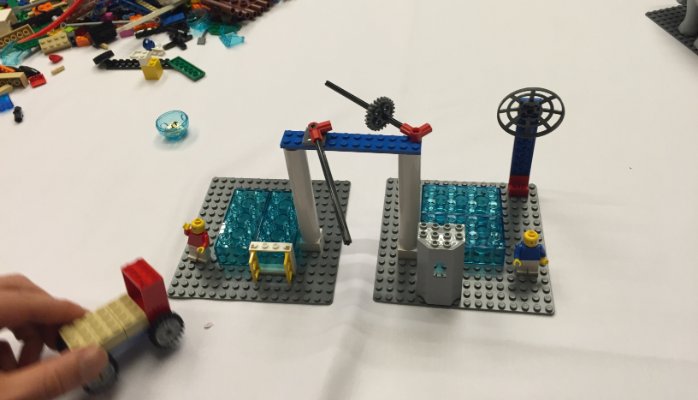 The executive teams of two closely related companies of a leading global retail and wholesale group went on a three-day value creation boot camp.  The goal of this exercise was to prepare them “to be at their best” in the new operating model aimed at attracting more customers.

The boot camp consisted mainly of traditional workshops using flip charts, PowerPoint presentations and paper, but the group CEO wanted something more powerful and fun.  He had been a fan of Lego for years and wanted to do a workshop at the end of the boot camp to visualize the future business model with the help of Lego bricks.  Miriam Elst and I were the lucky facilitators chosen for this assignment.

The main goal we were given was to create a tangible and visual reminder of their boot camp efforts, helping them get started on the new business model.  It was stressed that this needed to be a shared model, creating a joint understanding of the future.  A non negotiable requirement for the 3 days was the use of co-creation techniques resulting in clear ownership and providing a risk free environment allowing the executives to discuss ideas openly.

Producing concrete ideas and results to answer complex questions with no clear answer in a risk free environment with 100% participation of 100% of the participants is the pre-eminent domain of the LEGO® SERIOUS PLAY® method, so as certified facilitators our hands were itching to get started.

The LEGO® SERIOUS PLAY® method is not a one size fits all. The facilitator needs to customize the workshop to enable the desired outcomes.  This customization and knowing which shortcuts to take requires thorough preparation, solid knowledge of the method with its application techniques and good customer understanding.  This is why a certified and most of all skilled facilitator is crucial to a successful LEGO® SERIOUS PLAY® experience.

In order to design a workshop that would meet this goal, we took into account the different elements of the boot camp:

Key topics to be addressed

Getting down to business

Every LEGO® SERIOUS PLAY® workshop starts with what is called skills building, a critical first step designed to get people familiar with the bricks and gain confidence in using them to think, communicate and solve problems.  Usually this part is not directly related to the topic of the workshop, but since we were pressed for time we decided to already start working on the session objectives during these introductory exercises.

During the skills building, the core process is introduced:

The first boot camp related challenge we gave participants was to take an existing model and adapt it so it would look like their personal key capability relevant to the new operating model.  After sharing and reflecting on this, we went on to have them build a model of their ideal new role. At this point, the participants were on a roll.  When time was up, they wanted to continue building.  Those who finished the challenge early started building random Lego models.  During the sharing and reflection moments, they were enthusiastically using metaphors to tell each other elaborate stories.  The participants were clearly getting into a mental state which is called flow, a condition in which we are completely engrossed in a game or task and utilize our learning potential to the fullest. Flow is crucial for an effective LEGO® SERIOUS PLAY® experience.

Now that participants had the necessary skills, we could move on to more challenging assignments.  The end goal of the workshop was to arrive at a shared model.  In order to get there, each person first needs to build one or more individual models.  The executives were asked to build their personal understanding of the future operating model.  In LEGO® SERIOUS PLAY®, this is called an aspirational model. In the sharing round, each executive told a vivid story about the future operating model he or she had built.  During reflection, the group discovered that there were a lot of similarities and synergies between the stories and models.  A shared vision for the future was beginning to emerge.

It did not take them long to build this model since they had already seen so many synergies during the reflection on the individual models, thereby connecting each others stories with their own.  The many metaphors depicted and mental connections forged with fellow team members in the previous assignments made it a piece of cake for each of the participants to tell the full story behind the newly constructed model combining all of their stories. The groups then shared the story of their aspirational model, discovering many similarities and potential synergies between the 2 companies.  This concluded the workshop, leaving participants energized and full of ideas for the future.  They had a tight deadline to get back to the office and open a new year’s party for the staff, but they were into their ‘flow’ and continued for a while to exchange thoughts and ideas.

The group CEO had been observing the workshop and was very pleased with the results.  The boot camp objectives were perfectly met, key topics were represented in the different Lego models and his executive teams were full of energy.  He had been taking many pictures and was thinking about the possibilities for the future boot camps to be organized in 26 countries.

This short workshop demonstrated only part of the possibilities LEGO® SERIOUS PLAY® offers to support building a better business.  Given more time, we could have explored the different agents influencing the new business model, play out scenarios to see how the team would react to events, extract simple guiding principles and much more.

LEGO® SERIOUS PLAY® seems to be generating a lot of interest.  One of the next opportunities in Belgium to get acquainted with this powerful method is given to the members of ADM during an intro session on 3 February 2016.

Want to learn how LEGO® SERIOUS PLAY® can help improve your business?  Feel free to drop me an email on christian.tijsmans@connectthedotz.be.