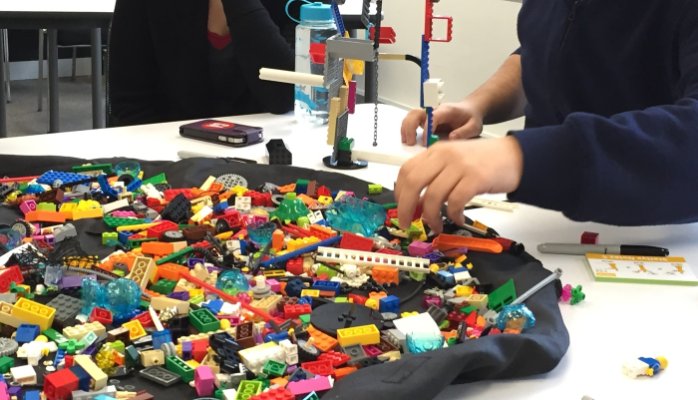 The following was posted by Michael Fearne on LinkedIn Pulse

I’ve been a big fan of General Assembly (www.generalassemb.ly) and their innovative approach to learning. I recently had the opportunity to work with their Melbourne office to combine my love of LEGO Serious Play and their User Experience (UX) Design Course.

The brief was to take the 18 students from the course through a short session to show them the LEGO Serious Play technique, how it could help the current project they were working on and how it could be used more broadly in their field.

The students were working in groups of three on real world design projects from clients connected with General Assembly. As LEGO Serious Play works best with smaller groups we decided run three separate sessions. Each session had six people in it (3 from one project, 3 from another project) and went for two hours.

We started each session with an introduction to the LEGO Serious Play technique (it’s history, who uses it and for what). We introduced the basic steps and the guidelines we use to maximise the technique.

We then launched into the standard warm up activities (called “skills building” in LEGO Serious Play language). This always takes around 40 minutes with a new group and is vital to the success of the workshop. If you’ll indulge me a slight detour from this case study… This warm up does a couple of things. At a basic level it gets people comfortable with touching and playing with the bricks. Reconnecting with that element of play that is in all of us. Showing that it’s ok to be playing with LEGO at work.

But only if you take the time to build up that vocabulary with the proper warm up activities. Detour over, back to the case study.

The first question we delved into was around understanding their clients. The students had just met their clients earlier in the week and received the brief for the project. We got the students to individually build how they saw the client.  What they thought were the client’s key characteristics, their stressors, the vision for their company, etc.

After they shared the story of their model, we got the three people working on the same project to combine their models into one shared model of their client. The aim of this activity was to get everyone in the same project with a shared understanding of the client and it’s needs. Some groups were already in close alignment, but other groups had quite different views.  This activity gave the groups a solid, consistent base to work from for the remainder of the project.

The last question we asked of the groups was a little more free form. We asked them to apply this LEGO technique to a part of their project. Here is what they came up with:

We finished off the session with a discussion of other ways to use this technique in the field of UX. Some ideas were: Envisaging solutions / future states; Story boarding; Prototyping; User Research (using the LEGO Serious Play technique on end users to gather more emotional / in depth information).

It was a very short two hour session, but the students moved quickly through understanding the basics of the technique to how they might apply it to their projects and more broadly in the field of UX.

Of immediate benefit was the increased understanding of their current project. For some of the more high performing teams it confirmed they were on the right track and allowed them to share more nuanced ideas and stories to take the project to a new level.

For other teams who were originally struggling with their project (due to difficult clients or difficult team dynamics) it allowed them to reset and build from a shared base of understanding.

And that’s what I love about this technique. Because it is based around having a better conversation it doesn’t matter where you start.

You could start with a dysfunctional team or a team that has issues and LEGO Serious Play can help bring them together and refocus their work.

Or it could be a high performing team and LEGO Serious Play just takes the conversation and group dynamics to amazing new levels.

LEGO Serious Play is an exciting, versatile new language for business. I’m really keen to explore it further and see where it can take us…

Michael Fearne is the founder of Pivotal Play. An unconventional consultancy helping companies to solve problems and create more meaningful conversations through the power of LEGO Serious Play. To find out more about Michael and Pivotal Play go to www.pivotalplay.com.au