Let your hands think for you! Lego®, serious play and human resources 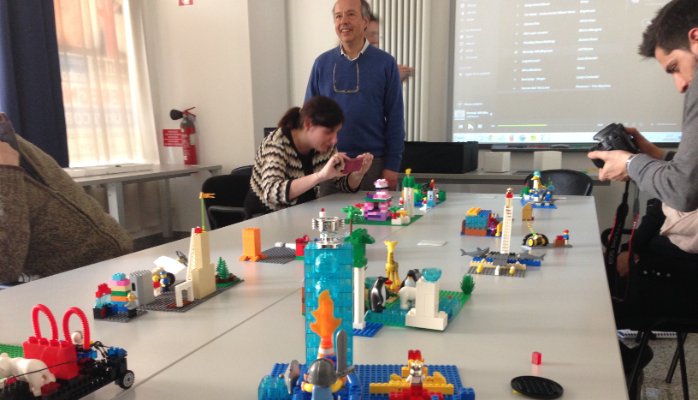 Every time I introduce a Lego® Serious play® workshop in a company I have to face the Human Resources managers’ most frequent question “Can you provide me with more info about this method, please? I don’t know if you’ve realized our context, but we have no time to waste by playing with Lego®”.

Despite of the remarkable set of records performed by this method within corporate environment (from technology giants such as Microsoft or Google, to automotive top brands such as Ferrari, Mercedes, Toyota and Nissan, or institutions such as Nasa, European Commission or UN, or just multinationals such as Unicredit, Unilever, Coca Cola, Roche and Pfizer) the terms Lego® associated with serious play still puzzles most of the HR managers in the whole world. Maybe the reason is that Lego® is the most powerful (loved and known) brand in the world nowadays (see Brand Finance http://bit.ly/1N4hTIm), so everybody recognizes it for what it is: the world leader in the toy industry.

Or maybe because most of the managers belong to the Lego® generation, those who used to play with lego when they were kids.

“Oh, houses, roads and minifigs! We never stopped to build, create, demolish, build stories and so on …!”

Not many people know that Lego® Serious play® method was developed within Lego® (with the contribution of two of the best universities in the world: IMD – International Institute for Management Development – in Lausanne and MIT – Massachusetts Institute of Technology – in Boston) to face the toy industry strategic crises at the end of last century. Or that the same method was employed by Lego® to successfully overcome the company crises who almost bankrupted the company in 2009. “When you reach success it’s wonderful! Breath, relax, enjoy the moment! Then think: now it’s the right time to reflect on what to do to maintain it.”

Maybe it’s our (the Trained Lego® Serious play® facilitators community) fault in stressing the tools (the Lego® bricks and elements) rather than focusing on the power of the method, our proficiency in using it, our skills and our record of results within the organizations we assisted. “Leonardo da Vinci used to say that simplicity is the ultimate sophistication. It’s really hard to immediately grant access to complex concepts easily. It’s where we demonstrate to be good.”

“None is first or last; everyone can express their thoughts … disruptive ideas emerge, those with the most significant impact.”

“The Lego® Serious play® Method is about creating new knowledge to solve problems. It is about surfacing and clarifying insights. The Lego® Serious play® Method can surface and name what usually goes unspoken in a room. It can articulate concepts in a new way through accessing the whole brain, including the unconscious, as you let your hands help you do the thinking and communicating.”[3]

“You can seldom speak up words without thinking about the consequences they can produce: but the model seems to come up by itself: auto-generated, manifested! You cannot do anything! You realize what you’ve created when it’s already there: in front of everybody.”

Lego® Serious play® Method is a facilitated thinking, communication and problem solving technique to use with organizations, teams and individuals. It employs Lego® bricks and elements to help participants “to think with the hands” generating insight, awareness and engagement.

In Lego® Serious play® Method each participant builds 3D models used as visual metaphors to answer to facilitator series of questions. Building 3D models and the associated storymaking process involves all aspects of the human dimension (rational, emotional, and instinctual).

“We all got around the table without fears, unclothed, shameless. Just watching in each other eyes!”

Why does the methodology employ Lego® bricks and elements? Hypothetically others tools can be used (such as clay for sculpturing or brushes and colors for painting). There are mainly two reasons that make Lego® so effective: “I can’t believe I’ve constructed such a beautiful model in such a short period of time! I felt like if the thoughts blow up autonomously from my hands in Lego® bricks form!”

Lego® Serious Play® Method is used in meetings and workshops, where complex issues are addressed (such as those related to the development of a team, the development of the business, organizational change, etc.) and where decisions have to be made, shared and supported by all those involved in the workshops. Lego® Serious Play® invites all participants to take an active part in the process. The common language – the bricks – treats everyone as equal and allows every participants to be heard: each participant can express their point of views over all aspects. This means taking advantage (and get the contribution) of the experience (competence, skills) of everyone involved, including what everyone thinks of their own work and that one of the others. Lego® Serious Play® method makes sure that everyone is involved at 100%, without feeling any kind of stress.

“We wanted to take a new path, to change our ways of acting, be open to change”

With Lego® bricks participants build models, giving them meaning through the story (storymaking), playing with various possible scenarios. So it is easier and more engaging the discovery and analysis of relations and connections between people and their world, the observation of internal and external dynamics, the exploration of different scenarios, being aware of the different possibilities.

“From bricks to the words …. explaining it was easy, much more than in a traditional meeting: the screens disappear, people come out”

The process of Lego® Serious Play® enhances understanding, sharpens intuition and socially tighten up the group that “plays” together. The method allows better decisions based on data and factual information; it allows to explore new possibilities, making the whole team committed to the organization’s goals and towards the shared solution; it allows to realign the group to the vision, enriched by the contributions of all participants. “Together: the main take-out at the end of the workshop is this sense of BEING TOGETHER, so loud that you cannot avoid to feel it and live it”

Generally Lego® Serious Play® is a tool that facilitates divergent thinking, communication and deep analysis, in solving problems of the real world. For this reason it is an ideal tool for HR because it allows everyone to think with their own hands and contribute to the development of the organization.