Not being Danish is not an issue for me, says Lego’s incoming CEO 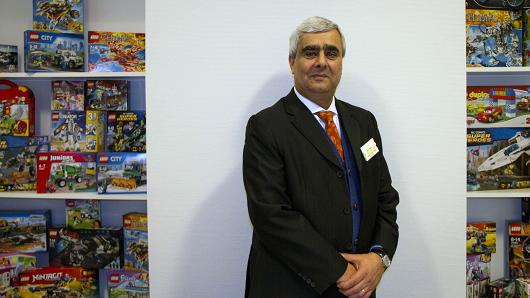 As of next month, internationally-renowned toymaker Lego will be headed up by the first non-Danish CEO, but according to the man who will be taking the reins of the brand, he doesn’t expect this to be an issue. This video and article published today at CNBC

“Not being Danish is not going to be an issue for me,” Bali Padda, Lego’s incoming CEO told CNBC on Wednesday.

“We are a Danish company firmly rooted in Billund, Denmark, with strong, strong heritage here in Denmark and that’s going to continue for us. So I don’t see difficulties along those lines at all.”

On Tuesday, the toymaker announced that Jørgen Vig Knudstorp would be stepping down from his role as chief executive officer, after taking on the position back in 2004.

Core business based around the brick

Around the turn of the millennium, shortly before Knudstorp became Lego’s boss, the toymaker was facing its “most serious financial crisis to date” with the industry having to grapple with new consumer tastes, challenging market conditions and intense price competition.

Over-diversification and moving away from its core element—that of the physical brick—was seen by many as a key attribute of why Lego had the financial problems it did back in the early 2000s.

However, more than a decade later, the brand is stronger than ever and is seen as one of the biggest toymakers by revenues worldwide; having achieved 35.8 billion Danish crowns ($5.16 billion) in overall revenue for 2015 — all of which was done under the helm of Knudstorp, his team and their restructuring plan.

For Padda, who at present is the Lego Group’s Chief Operations Officer, he intends to keep the core values of Lego and its brick during his time as CEO, adding that Lego’s connected brands and tie ins with popular franchises such as Star Wars, help complement the business’ core value of the physical brick.

“The core of our business is based around the brick. It helps the children both from a creative point of view and also from a logical thinking point of view.”

“For us it’s very important that we reach as many children across the world as we can, and for me the induction into Lego was all about these bricks — what a powerful material this is and what this can do to children,” said Padda.

“So my focus would be to continue to build the brick business, and (look at) how we can take it as a business further and further as we go along, and at the same time look at the movie business, look at the games business and see what can be done to help augment the brand and continue to leverage it.”

Even when it comes to the current political uncertainty seen across the globe and the concerns over future trading operations, Padda said the group would continue to focus on the brick and their consumers, but would address these business issues when they unfolded. When discussing Padda’s new position, Knudstorp said in a statement that he had learnt a lot from Padda’s “great leadership and execution”, which the incoming CEO had displayed throughout his career at Lego.

“I have worked closely with Bali for many years and I am confident that we will continue to build on that close collaboration in our new roles,” Knudstorp added.

Knudstorp will not be leaving the company, but rather heading up the group’s new entity, the Lego Brand Group. Bali Padda is set to take on the new executive role on January 1, 2017.