A blog post by by Jacqueline Gunn, @tinkgunn about Storymaking

We were really grateful to join the workshop hosted at Clore to explore both our own leadership techniques and learn some broad structures of futures thinking and projecting.  Lego Serious Play is based on three premises: play, constructionism and imagination.

Through a series of both individual and group exercises (all involving various lego people, bricks, animals, weapons), we imagined dictators, our future selves, external driving forces, and even what the future for social entrepreneurship would look like with “Openness to financial innovations and unlimited length of time horizon.” (see below!) 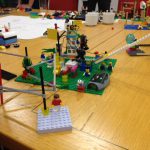 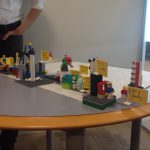 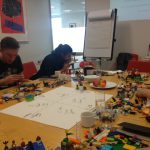 One of the things I found most fascinating was that although at the beginning of an exercise you may have no idea how to answer the question (“You have 10 minutes to illustrate where you want to be in 2020.” Ten Minutes!), through the process of starting to build and use the Lego, it became easier to articulate and develop meanings and symbolism. A tiny addition to your Lego board could mean something huge to you- and it was the other participants’ role to unpick and ask questions behind the meaning of what you illustrated.

The use of the Lego bricks opened up our imagination, enabled us to discuss some really powerful concepts openly with distributed dialogue, and demonstrated how interpretation is so subjective. We also learned some structures for futures scenario planning; as a group, creating four visions for the future of social entrepreneurship. None of which are likely to happen- but creating an imagined future enables you to take steps into it, and take an Adaptive or Activist stance to your position within that accordingly.

It may seem flippant to be playing with Lego, but it was a really eye opening experience: “Lego enables us to create metaphors and those metaphors are like a torch light. They help us form memory, connect emotionally to what we are doing, and activate parts of our brain that aren’t usually connected.”

I think you have to be open minded about ‘play’ to get something out of Lego Serious Play, but I’d encourage anyone to explore how it can be used within an organisation, as well as supporting the development of entrepreneurs.