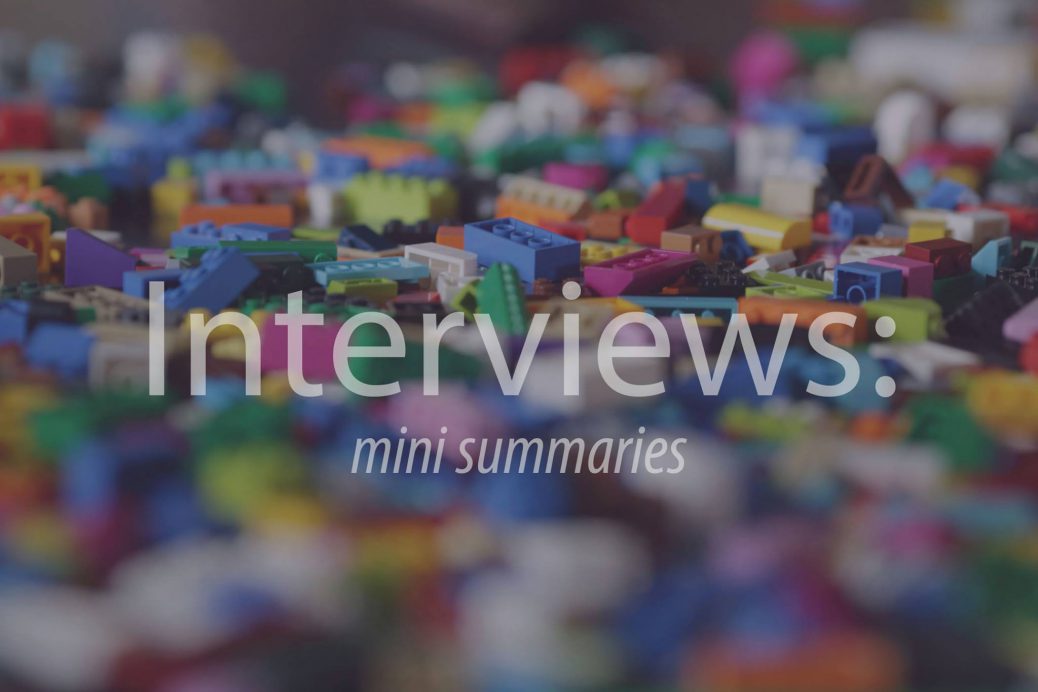 Remember, we had some Skype calls with fellow community members? The interviews were conducted with 6 people and lasted average 1,5 h. There were so many good ideas and discussions that we just didn’t have the time to transcribe them. So we decided just to bring out some interesting little details about them. Enjoy!

Joyce and Eli were the first ones we had Skype interviews with because of their in depth knowledge of LSP. They have been using it for around 20 years and are well aware of the original purposes of the method. They believe in long multiple day sessions, where participants can truly concentrate and go in the state of flow without disruption. They stand for the quality of counselling, and they would never facilitate a workshop for the sake of just playing with Lego bricks. It is important for them that clients receive the result they want to accomplish. One of the remarkable achievements is contributing a change in Indonesian legislation.

Sebastian was the first Lego Serious Play facilitator in Indonesia. He used creative ways to promote his consulting business by dressing up as a Lego mini figure with big red lego suitcase and riding the elevator in massive commercial buildings. He knows what is important in his line of business and that is references. He didn’t start with small fishes but went for the big one straight away – the largest bank in Japan (Bank of Tokyo Mitsubishi). Next, he went to other banks with testimonials from his previous clients and that’s how he rolls. He says every environment is different and you need to know what works where to be successful.

Stephen is someone who stumbled across LSP and started his research on the Internet.  He mostly uses it in an academic environment – on university students in group assignments. In lectures there is no time to have long sessions, so Stephen does very short workshops and has had great results with it, especially with students with difficulties. He uses LSP for assignment alignment and as a wider facilitating tool in classes. For example, the assignment alignment in a group means that each member builds their version of their understanding of the group task given for the semester, then they discuss, agree or disagree and at the end of the lecture have a shared vision of how the task is supposed to be done.

Sean is the co-author of the book “Serious Work: How to Facilitate Meetings and Workshops Using the LEGO SERIOUS PLAY Method”. From time to time he conducts meet-ups in London. These are perfect opportunities for him to get voluntary guinea pigs to test his new skills and questions. “There is an art in designing building questions,” he says. Poorly formed ones can confuse participants and deliver no meaningful results in the workshop. Sean recommends preparing by writing down your questions and testing them in a group setting to see the results.

Scott has focused his academic career on studying human communication with incorporating LSP method. He is doing and has written many research papers on the subject. So far he has conducted multiple workshops with children in small groups and studied the effects. Scott says that the benefit of LSP approach is that it provides a safe place for everybody because the focus isn’t on specific individuals but rather on the model. Frequently people get emotional in conflict situations and have a hard time expressing their emotions. LSP helps to ease down the emotional component by focusing on the model.