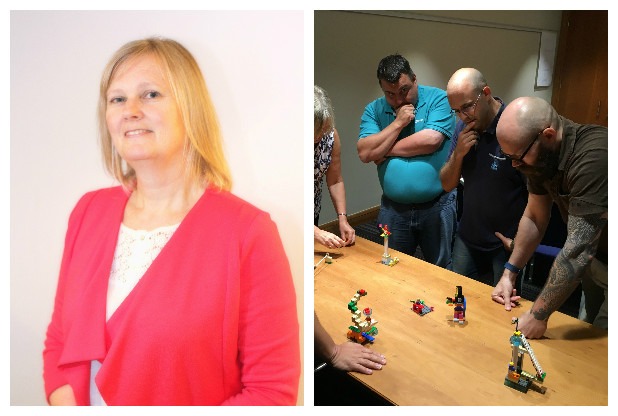 Fully-grown businessmen and women are being urged to play with Lego to help their companies grow. Ever since its invention in Denmark in the 1930s, Lego has been a hugely popular game for children. Adults in the boardrooms of such corporate giants as Google, Unilever, Pfizer, Fedex and Yahoo are also letting their imaginations run wild with the colourful plastic building bricks in the boardroom.

And they are using Lego to effectively solve business problems because all people in meetings are engaged and interested in contributing. Business consultant Alison Rex, who runs Rex Associates, of South Hykeham, is a now a facilitator for a training package called Lego Serious Play. Participants are led through a series of questions, probing deeper and deeper into a chosen topic. Each person builds their own Lego model in response to the facilitator’s and their creations serve as the basis for group discussion, knowledge sharing, problem solving and decision making. The beauty of the method is group problem solving, participants must learn and listen and it provides gives them all a voice.

“After intense training in London by the concept’s principal Robert Rasmussen from Lego, it’s fantastic to be able to bring Lego Serious Play to businesses in Lincolnshire,” said Alison.

“It’s about interacting with the bricks. When people start touching the bricks they bend in and listen. “In a conventional meeting scenario or training session your probably only getting input from 20 per cent of the people round the table. “With Lego Serious Play you get 100 per cent participation. It can be used for business and organisational improvements, innovation and product development, team development, individual development and education innovation.

“When you start working with your hands it unlocks other information in your brain. People naturally want to contribute, be part of something bigger and take ownership and allowing each member to contribute and speak out results in a more sustainable business.” Alison said she has always used Lego in her training sessions but recently became an accredited Lego Serious Play facilitator after seeking to expand her own skills. Lego spokesman Emma Owen said: “The Lego Serious Play methodology deepens the reflection process and supports an effective dialogue – for everyone in the organisation.

“The method that is used is an innovative, experimental process designed to enhance innovation and business performance.

“We are always very interested to hear how our products are helping businesses.”