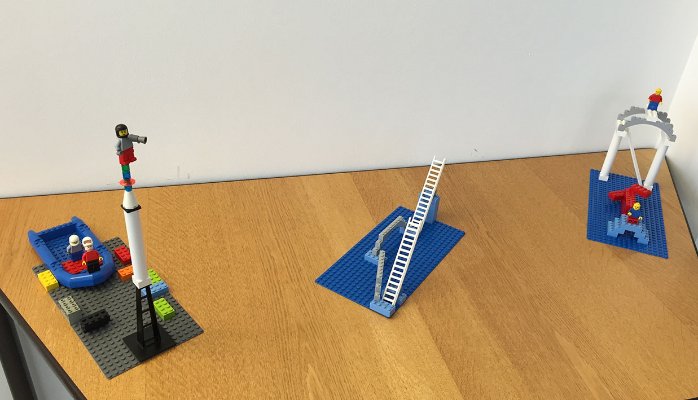 I was very curious about Lego Serious Play methodology when I first heard of it, so I eagerly subscribed to a presentation event in Ticino, organised by Fondazione Agire.I am not going to talk about what Lego Serious Play is or is not, as everyone could probably know more than I do with 15 minutes of googling. But I would like to share my experience.

I volunteered to play with Lego… (no…. wait, that was last night at home when I had to choose between entertain the kids or do the clean up). I volunteered to be part of a communication experiment. Other two attendees and me were taken in a room with a Lego platform for each one of us, plenty of bricks around and a task: build your own idea of “innovation“.

Now… where do I start? For sure I am able to build a star ship, or a police car, or a castle… but where do you start from, when you need to build a concept? I was totally stuck! Then one of the guy organising the event said the “unlocking” phrase: “if you don’t know where to start from, take bricks in your hands and start building… the idea will follow”. That was it!

I don’t know what kind of magic happens when you hold Lego bricks… I immediately started to think: “what is innovation for me?”. I thought: “innovation is not just something new…. it is a path, an experience…”. (Of course my whole concept can be argued and could sound like total garbage, but is not the point. And in fact I found interesting that “innovation” was something different for each of us). Then I thought: “You start to innovate when you want to change something in better. Doing that you face an experience that start to elevate yourself from something maybe comfortable, solid, but so traditional that could be even boring. Than you take risks, you go towards instability and maybe to a dangerous path. But your attempt of innovation builds in you an experience that somehow elevates yourself from where you were standing before. Now you have a much wider view of everything around, regardless of the success of your innovative achievement”. (As I said before: don’t focus on the thoughts, but on the process :-).

So I built a traditional little bridge, solid and safe, monochromic and boring. On top of it, a little mini figure was sitting comfortably. Then I built another bridge, much higher that was seating on top of two tall pillars. Unstable, but with style somehow. Bigger and connected with arcs. To achieve the top of it the little mini figure had to climb a ladder.And he was standing on that (not sitting) with pride. I thought to have expressed everything I have written above, with a language more efficient than words that perhaps I was not able to tell.

A curious fact. I originally plugged in the two little men as one looking at one direction and one in another one. Then I thought: “this is not right: they have to look at the same direction”. Why? I wasn’t sure… but it was definitely wrong as it was and right to let them face the same direction. I presented my model to the audience and they had to “read it” without hints. Impressively enough, several people found meanings to the fact that the two little man were looking at the same direction: “because they are targeting the same goal”, “because the focus doesn’t change regardless or where they are”, “because in a company we may have people with different views of the picture (the one at the top as broader sight), but it is important that we all look at the same goal”, etc.

This for me was a crucial point: developers – as I am – sometime are not really able to communicate some idea using a language that is totally understandable by non technical people. In this case, Lego helped a transversal communication.

Another aspect: one premise was that typically in a meeting 20% of the people talk 80% of the time. I can confirm this figure, although I am not able to say if it is because of some form of fear/respect towards more senior people, or because real luck of talking skills or something else. Whatever: with Lego people felt very compelled to share their own opinion and the organisers claim that that 20/80 disappear. Based on the little I saw, I am keen to believe this…. as we are talking about a Lego model after all!

In conclusion: would I like to use this methodology? Definitely yes.

Where would I apply it? Personally for a brain storming activity or kick off of a project for example.

Did I enjoy it? Yes, both: the process and the outcome.