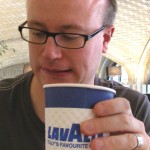 David Gauntlett is Professor of Media and Communications at the School of Media, Arts and Design, University of Westminster, UK. His teaching and research is in the area of media and identities, and the everyday creative use of digital media.

He has worked with Lego on the development of Lego Serious Play since 2005.

He is the author of several books, including Moving Experiences (1995, 2005), Web Studies (2000, 2004), Media, Gender and Identity (2002, 2008), and Creative Explorations: New approaches to identities and audiences (2007), which was shortlisted for the Times Higher Young Academic Author of the Year Award. He produces the popular website about media and identities, Theory.org.uk.

His new book, published in spring 2011, is entitled Making is Connecting.