This post gives a quick overview and lessons learned from the 22nd January 2013 session with Legos we had at the European Innovation Academy (at Tallinn University of Technology).

General timeline This winter the European Innovation Academy event decided to kick it up a notch for their participants and bring in some LEGOs to provide participants with an interesting new experience. Good decision on their behalf, no doubt! For the facilitator, however, this posed quite a challenge as the task entailed 1) getting people acquainted with the Serious Play method, 2) assigning a personal task to every team (of 9) depending on their current development level, dividing the time to individual and team efforts, and 3) having each team present their common vision to the others.

Getting started As time was an important constraint, we got to the business end of the session quite quickly (12-13 minutes). To set the pace, I used two short exercises: 1) building a duck, and 2) building a tower and then turning it into a bridge. These worked out rather well despite the quite unfavorable setting of the room.

Lesson #1 By unfavorable setting of the room I mean the following: we were forced to do the session standing up, each team at their own table where the LEGOs had been put into a large pile. As a lesson learned, I would advise against that setting, especially the standing part because the view of the facilitator is seriously blocked and some teams are bound to pay less attention to you. I’m a big guy but it took some effort to keep people away from making a lot of noise during the intervals.

We were also forced to use a big pile of LEGOs as LEGO had a major order time for Starter Kits so we didn’t quite have enough. I feared that would be a problem but it was much less so as people were able to combine the pieces very creatively despite the mess on the table.

Proceeding For the first part of the central task, each individual had to build their understanding of the key components to their startup (7 minutes). Each person then had 3 minutes to present their view and answer questions. Finally, the teams moved towards a common understanding by combining elements on the run and presenting the whole view to others. 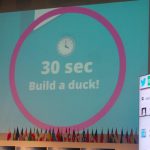 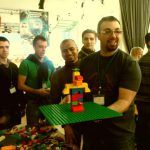 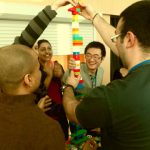 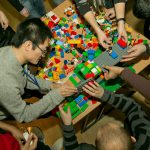 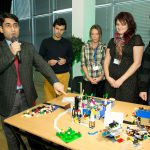 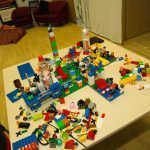 Lesson #2 With young active people, it seems that everyone wants to express their points. I planned for some example presentations by some teams but during the session every single team went for the mic so we changed the course of the session to allow everyone to present their startup. So I know now that under some circumstances one must be prepared to extend that part to accommodate for the drive to express oneself.

Lesson #3 Considering that each team had a very limited time to find their commonalities, everyone took a really great job. Many teams were able to identify a number of aspects about their business they had not included before so a time structure 7+3+15 (individual work + explaining individual work + finding commonalities) was quite sufficient for the particular task.

Finalizing We ended the session with presentations and then a round of applause to celebrate for the creativity in the room and the progress each team made.

A few more points to stress
1) although continuous playing is the ideal, everyone needs to hear the task clearly so it’s a good idea to ask everyone to step away from the table for the time of giving tasks
2) I tried giving a choice of two different tasks depending on the development level of each startup but that approach proved to be too confusing. if possible, I’d stick to one central task only and no variations to it
3) When there are a lot of people in a session, moving around and continuously double-checking if the task is understood and everyone involved becomes crucial. I ended up including many people into discussions and elaborating on the proceeding to almost all tables due to the different approaches taken by the table and the different startup profiles

Overall score to the session 8/10

Hope this helps when you also have a large session to run and the time is very limited. Let me know if any questions! Thanks for reading