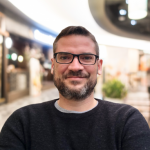 I was trained in the LEGO® SERIOUS PLAY® Method by Per Kristiansen in Colombia in 2015. My background is in Computer Science, focused on innovation and new technologies. In 2014 I was appointed Innovation Channel Manager for a large organisation covering Latin America and Canada, exploring different methodologies such as Design thinking. This role gave me the opportunity to work in several countries around Latina America and Europe, and gave me the opportunity better understand the value of people within organisations in different environments, where collaboration and inclusion is Key.

In 2015 I migrated to Australia, where I started working as a Scrum Master and Workshop facilitator helping teams tap into different ways of thinking using methodologies such as the LEGO® SERIOUS PLAY® and LEGO® for scrum, focusing on the importance of customer centricity.

Currently I’m working with my company BrickPen helping individuals, teams, and organisations to have different conversations and unlock knowledge they didn’t know they had in them.

Have you been trained in LEGO SERIOUS PLAY?